Yandina may have first been known as “Native Dog Flat” but since then it has had many titles – river town, highway town, railway town and timber town. It is in fact the oldest town in the Maroochy Shire.

Walk the heritage train and catch a glimpse of the past and how our pioneers lived.

In the time of “dreaming” a beautiful Aboriginal girl named Maroochy was loved by Coolum, a member of her trip. Maroochy had also caught the attention of a might warrior named Ninderry. He was from another tribe, a fierce and warlike group.
One day when Coolum was out hunting, Ninderry Stole the Woman, Maroochy.

The infuriated Coolum gathered some men and pursued the couple. But, Coolum feared the giant Ninderry and instead of remonstrating and demanding the return of his woman as was the custom, Coolum used the cover of darkness to creep into his enemy’s camp, free Maroochy, and flee with her back towards home.

His cowardly act so incensed Ninderry that he followed them, and with a mighty toss of his club he knocked off Coolum’s head. It rolled into the sea, and it is still seen today as Mudjimba Island.

The spirit god ( the name Birrall is not to be spoken) was not pleased. He struck at Ninderry from the sky, turning him into a mountain of stone (Mt, Ninderry) She retreated to Blackall Range and cried copious tears that flowed and flowed until they became the Maroochy River.

Pioneer John G. Sommer originally built this house around 1900 on a site in Bridges, 2km north of Yandina Town. Benjamin M. Williams, a director of Maroochy Co-Op and his descendants lived here from 1923 – 1996.

It was the 1890’s, and the railway was injecting new life into Yandina Town, Hulking steam engines pulled into this station amid the boisterous chatter of passengers and work crews. Water for steam was pumped directly from the Maroochy River. Blackbutt and stringy Bark were railed to the sawmills, and maize went to Brisbane for sale at 2/- a bushel. 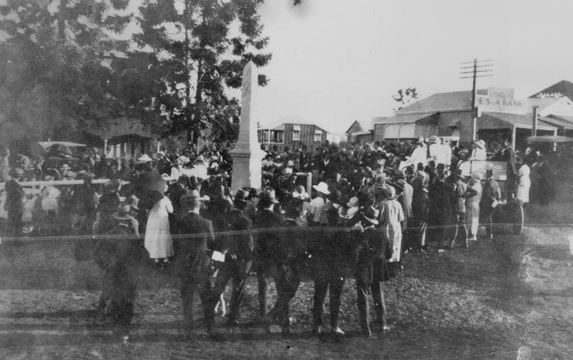 Generations of Australia’s can still see, embedded in stone, names of those who sacrificed all for their ideals and the nation’s defence and integrity.
118 men from the district enlisted for WW1. 228 men and 25 women enlisted for WW!!. This monument commemorates those who didn’t come home. it was originally unveiled on Jun7, 1924 in a Ceremony attended by over 400 people. 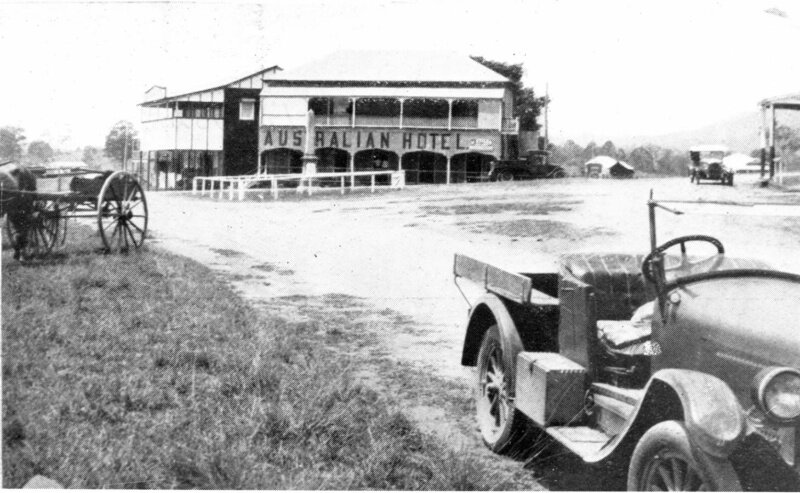 Yandina had been without a pub for 5 years when J.G Sommer built the Australian Hotel in 1889. In 1891 he relocated it from Farrell Street to the present site and renamed it The Railway Hotel. Whilst the hotel was being moved, you could still get a beer, and upstairs Mrs Sommer gave birth to a son.

Before the ES&A bank erected this building in 1920, Christian Walter’s family Grocery and produce store was on this site. In 1896 he was selling 1/2lb of biscuits for 4 1/2d. The ES&A moved into the original building in 1909 and shared space with the post office from 1914 until the building was demolished. 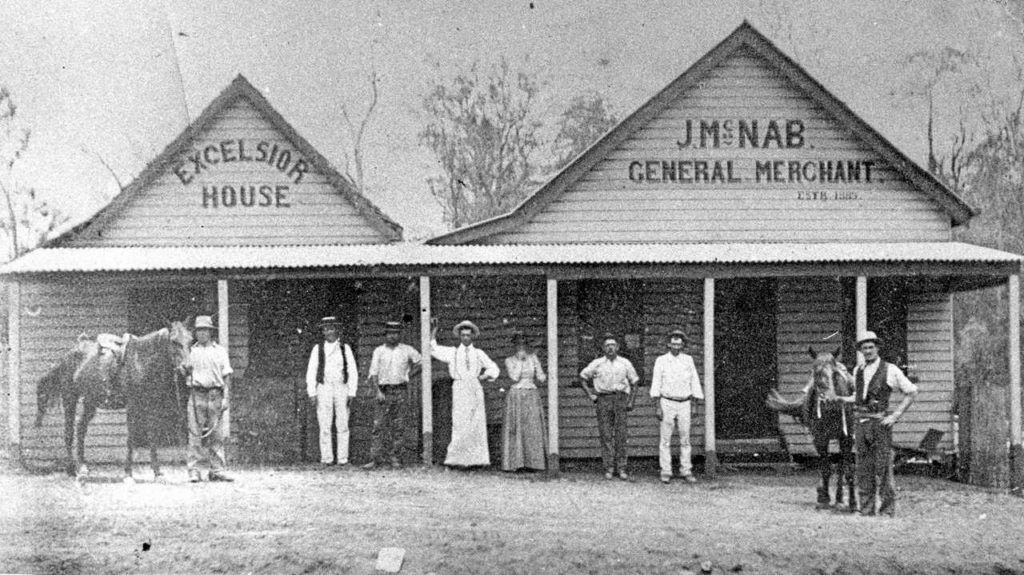 The people of Yandina have been buying their general supplies in this building since 1909, where John McNab moved his Excelsior House business here from Farrell Street. It changed hands a couple of times until the Maroochy Co-Op bought it in 1921. Less than a decade later, Australians were caught in the Depression and many farmers found themselves leaning heavily on the Co-Op.

George Best’s horse drawn butcher’s wagon was a familiar site around the district. Coulson mail and boat service delivered fresh mean and ice to farmers along the river. The best’s residence was nearby, and sons George Jnr, Arthur and Tim kept the business operating until 1958.

It wasn’t until 1923 that Yadira’s post office received official status. James J Dore became the first postmaster. When George Best Snr had this building erected, it served as the Post Office from the 1930s until 1995.

In 1909, the Malyon and Nichols general store stocked everything from boots to iron Nails. Shopkeeps wore long white aprons and customers came in for a gossip as much as for groceries and supplies.

Tom Rutherford first opened a bakery on this site in the 1900. Up each day long before dawn to heat the ovens, Tom didn’t have far to go to work as he and his family lived at the rear of the shop.

Michael O’Shea’s general store was on this site in the 1890’s. the railway station was opened. Boats ferried supplies up the river. The town was growing fast. Benjamin Lawton sold fresh mean from a site behind the store. He later sold his hook and block to George Best for 2/6d. The current building went up in the 1930s.

One of Yandina’s earliest stores, Daniel McNab’s drapery, was on this site in 1889. The current building used to be the highway Cafe from 1950 until 1996. 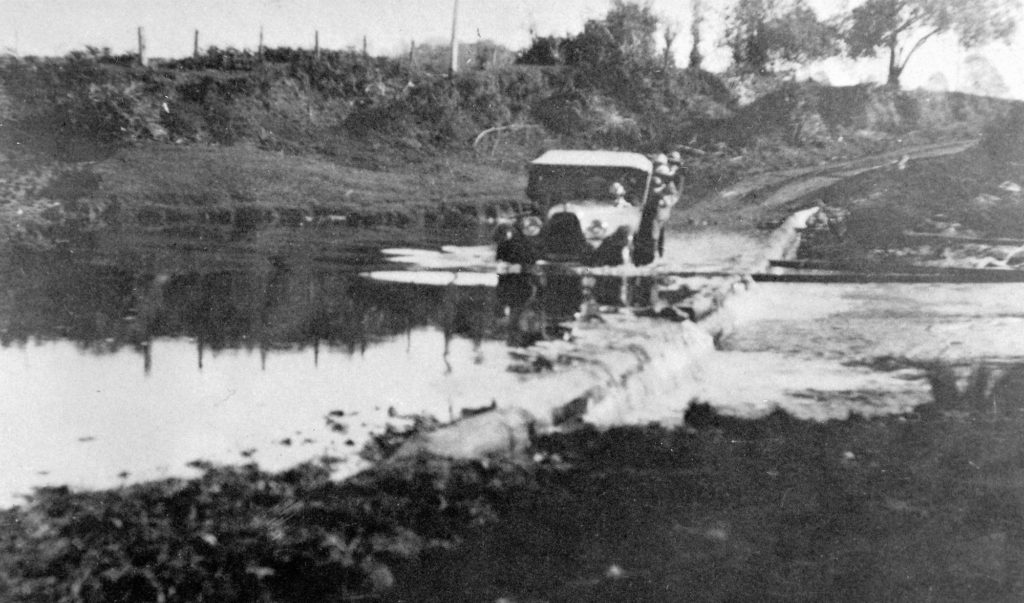 This was the only pace for bullock wagons and coaches travelling the Gympie Road to cross the Maroochy River Safely. The river had a firm rocky bottom and was used for heavily loaded traffic even after the first bridge was built in 1878. The bridge could only handle light traffic.

The Park is named after the wife of Yandina’s first selector James Low – the first European woman to arrive on the Sunshine Coast, This was the site of the Yandina Post Office (from which the town took its name), James Low’s general store, the Maroochie Hotel, and the Cobb & Co Stables. In those days the resident police constable was put on alert if the coaches were carrying gold. 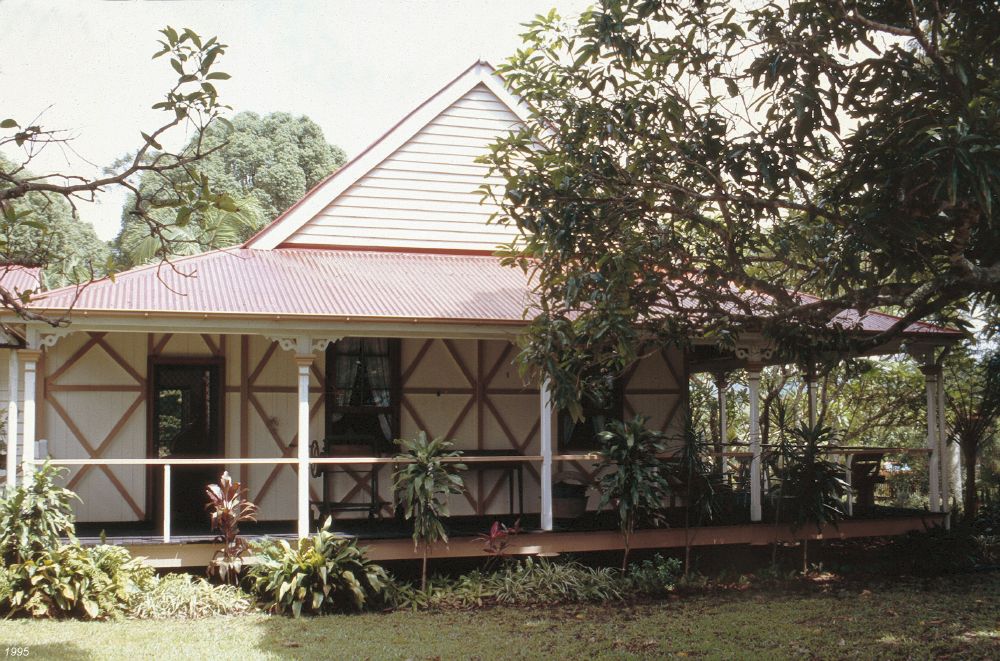 Timber used for this house was rafted downriver to William Pettigrew’s sawmill in Maroochydore where logs were lifted by hand-crane from the river, and milled. Bullock teams had dragged the logs to a rafting point on the river, where they were bound together with chains and the rafts man rode them to the crane site. the house was built for John and Louisa Low and it was named “Koongalba”.

The earliest recorded burial is for James Low who died in 1883. The town’s pioneers are here – Best, Stevens, Sommer, Galt, Dyne, Browne, Chambers. The headstones and monuments record our pioneer heritage.

In the 1880’s Arthur Gawthorne purchased a section for £3/9/6d and donated it as a site for a church. George Browne of Yandina Cattle Station donated cash, and the people of the district pitched in to build the church of pitsawn beech. It was a non-denominational church and was later purchased by the Church of England in 1919. It is the oldest surviving timber church on the Sunshine Coast.

The Home Secretary opened the Yandina School of Arts in 1916. Silent movies and travelling shows were popular community attractions.

In the 1920’s motorised traffic on the roads was increasing. In 1922, twenty-three motor cars made the trip from Nambour to Coolum via Yandina in seventy minutes. A new era had begun, and in 1924 William Granger established Yandina’s first Motor Garage on this site. 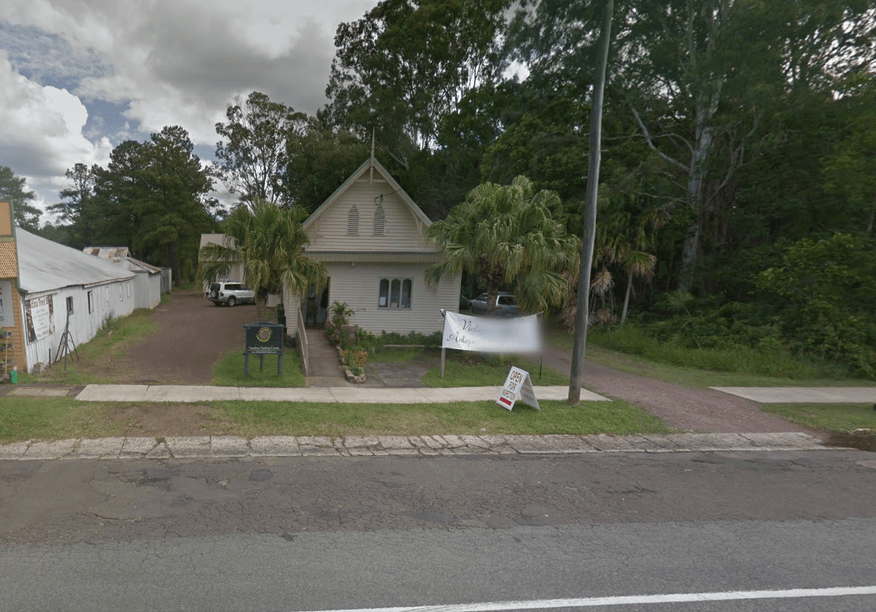 It cost £100, in 1904, to build the Yandina Methodist Church on this site, and from 1917 it was the Ladies Church Help Society that raised funds for its maintenance, Then, in 1955, there was a freak tornado, so powerful it blew the church right off its stumps.

Roaring hot forge fires, the strike force of a hammer on metal, the whinny of horses and the sounds of carriage wheels on dirt roads – that’s what you’d experience on a hot day in Percy Pinkerton’s “Smithy” in 1912. he was a master carriage builder and won prices for his work at the Nambour Show.

After this area was gazetted as the Yandina Racecourse Reserve in 1896, people used the annual race meeting for family outings. They came from all over the district for the picnic races, wearing their best clothes and crowding behind rough log barriers to watch the action. In 1903 it was George Best Jr, who won the pony race riding “Friskie”.

In December of 1939 the Drill Hall for “C” Company, 9/49 Battalion, was officially opened. During the war years, the local branch of the Comforts Fund wrote to servicemen and women, sent socks and jumpers, and hampers from McWhirter’s department store in Brisbane priced from 7/6d to $1 each. In 1957 the building was purchased by the RSL sub-branch. It was relocated here in 1989. 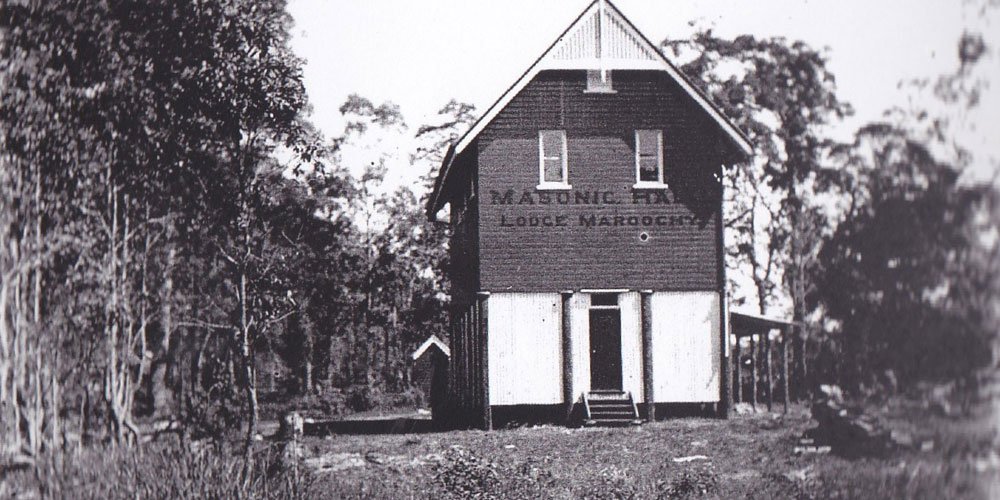 The original masonic temple was build in 1908. It was moved to the rear of the grounds in 1958 and an extension was built in front. The old building is remarkably well preserved – a tribute to skill of its builders and the quality of timbers selected for its construction.

As early as 1914, this was the Hamilton’s Family home. It was originally located in Stevens Street, and relocated in the 1930’s to make way for the post office and again in 1998.

It was 1889, the Yandina Provisional School was half built when disaster struck. They’d mistakenly erected it on the road! After some hasty relocation, the school finally opened in November 1889 with Deborah Lalor as the first Head Teacher. her annual salary was $65. Then, to handle increasing student numbers, the Yandina State school was opened in 1902. It also had problems, on cloudy days, it was so dark inside the students couldn’t see to read and write.

More things to do in Yandina nearby: 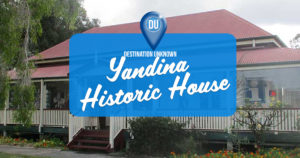 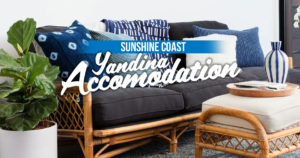 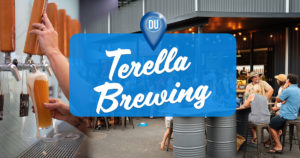 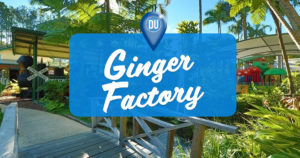 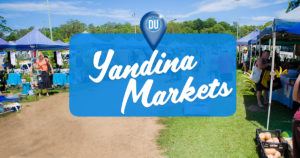 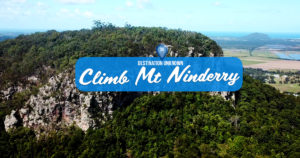